How to play Disc Golf 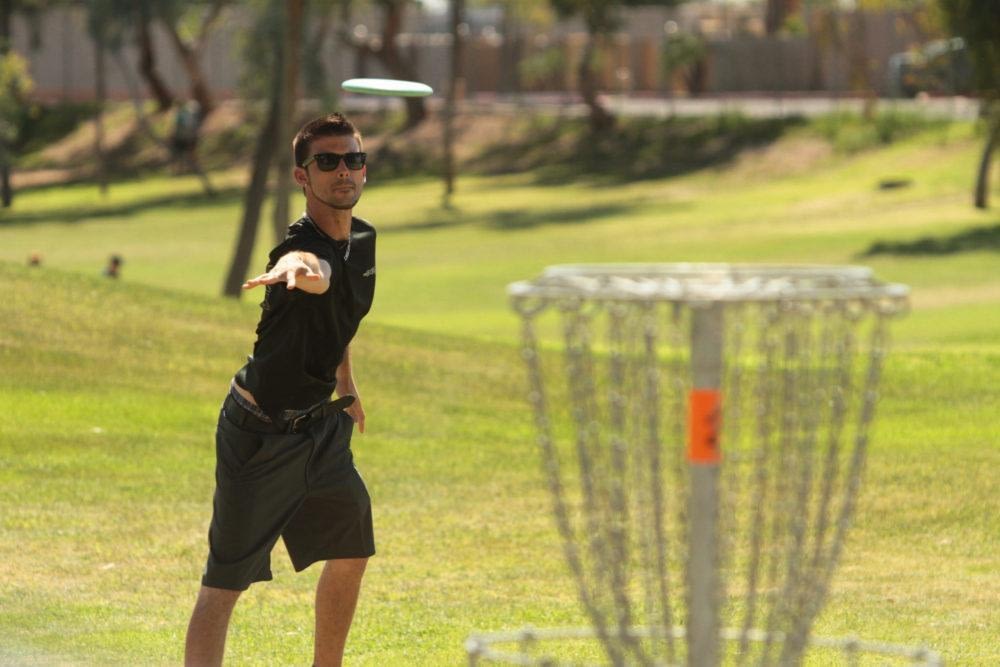 Disc golf is similar to traditional golf, however, instead of using golf clubs and balls aiming for a hole, disc golf players use disc golf discsand aim for a disc golf basket which is a pole extending up from the ground with chains and a basket where the disc lands. The object of the game is to complete each hole in the fewest number of throws, starting from a tee area and finishing with the disc coming to rest in the basket. Generally, a course is made up of 9 or 18 holes. Players start at hole one and complete the course in order, playing through to the last hole. The player with the lowest total cumulative throws wins.

Disc golf differs from traditional golf in important ways. Disc golf courses can use a wide variety of terrain. Often times, land not suitable for other park activities or development is the perfect terrain for a disc golf course. Disc golf is one of the best lifetime fitness sports. It is easy to learn, a healthy activity, and accessible to people of all ages and fitness levels. If you can throw a Frisbee® and you like to have fun, you can play disc golf. Today there are over 7,500 disc golf courses in the United States and millions of people who have played the game. Since 1976, there have been over 100,000 members of the Professional Disc Golf Association and players can compete in more than 3,500 sanctioned tournaments annually*. The positive experience with disc golf and the growing demand for more courses have led to the expansion of the sport all over the country, from small towns to urban areas.

Tee off order on the first tee will be by mutual arrangement or by flipping discs. The printed side is heads and the odd man should be first. Tee off order on all subsequent holes is determined by the score on the previous hole. The player with the lowest score tees off first.

Proper foot placement when throwing will require some practice. The foot that you put your weight on when you throw, i.e., the “plant” foot, must be as close as is reasonable to the front line of the tee or to the marker disc: in no case ahead of the line or disc, or more than 1 foot behind the line, or disc. The other foot can be any place you choose as long as it is no closer to the hole than the rear of the marker disc.

A follow through (stepping past marker disc after throwing) is allowed on any throw except when putting (any throw where the rear of the marker disc is within 10 meters of the hole). Falling forward to keep your balance after a putt is not allowed. This infraction is called a falling putt.

If the disc is stuck in a tree or a bush more than 2 meters above the ground, the marker disc is placed exactly beneath it and it is carefully removed from the tree. You have also just added one throw to your score. This is called a penalty throw. You may now proceed; however, take extreme care not to damage the tree or bush, or reshape them in any way to improve your throwing conditions. Some courses have “out of bounds” areas designed to keep players out of a certain area or for the general safety of the players. Observe the boundaries carefully and try to stay out. If your disc is “out-of-bounds”, i.e., you can see “out-of-bounds” area between the edge of your disc and the “inbounds” line, place your marker disc up to 1 meter on the “inbounds” side of the line at the place where your disc went “out-of-bounds” and give yourself a one throw penalty. Again, please be careful of natural vegetation.

Water hazards are to be avoided because your disc will sink! If, however, you have been so unfortunate as to land in the water, play it like you do the “out-of-bounds” throw, and don’t forget to take a one throw penalty. If the disc is touching any land above the water, it is “inbounds”. Standing water or mud on the course that is caused by sprinklers or rain is not considered “out-of-bounds” and the disc may be relocated to a dryer area no closer to the hole with no penalty.

A “mandatory” is sometimes used to keep players out of alternate-use areas or to make a particular hole more difficult. It is normally designated as such on the tee sign. The arrow indicates the side and direction the disc must pass. If your disc passes to the wrong side of the mandatory, you would either re-throw from the previous lie or throw from a designated drop zone area if marked and apply a one throw penalty.

Always leave the course better than you found it. Disc golfers tend to follow the “pack in, pack out” mentality to ensure no trash is left on the course.

Twenty years ago Brian Graham would walk in to park...
Read More

Recommend It is a content plugin that recommends...
Read More